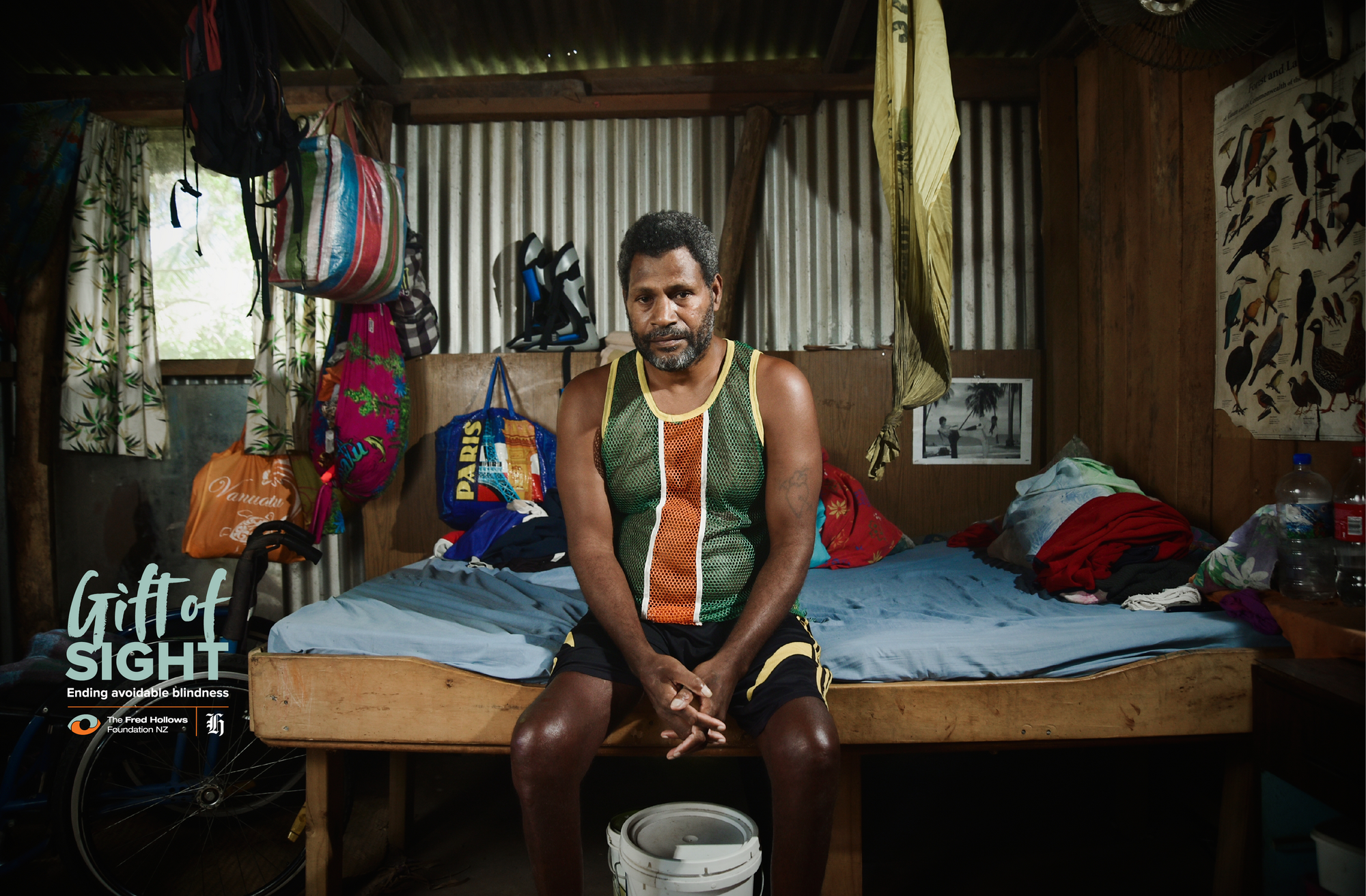 Giving the gift of sight to Karlpat

In Christmas 2018, we worked together with the NZ Herald and well-known NZ chef Michael Meredith to bring the gift of sight to Vanuatu.

In the Pacific four out of five people who are blind don’t need to be. Alarmingly, an increasing number of these are young people, suffering from diabetes eye disease.

During the last 20 years, there has been an explosion of diabetes in the Pacific, where the incidence rate is now one of the highest in the world. Yet only a generation ago it was uncommon.

“Over time the wrong diet can cause diabetes leading to diabetes eye disease which can result in permanent eye damage and blindness,” explains Michael.

The NZ Herald and NZ chef, Michal Meredith, joined our Pacific outreach team in Port Vila, Vanuatu to help raise awareness of the diabetes epidemic in the Pacific. While in Vanuatu, Michael shared his tips with the public on using the local produce to create a healthy and affordable diet.

Below you can read more about Michael Meredith's experience in Vanuatu.

Blindness to the disease leads to a worse blindness.

A once vital and fit man, his good and honest life was torn from under him when he was diagnosed with diabetes.

Had we met Karlpat in 2012, his energy and strength would have made a deep impression on us. Living on the island of Ambrym, the broad-shouldered 46-year-old worked as a mechanic and was a proud father to three children. However, unbeknown to him, diabetes was starting to take hold throughout his body.

His diabetes was diagnosed in 2014 after a fever led to him collapsing into a diabetic coma, resulting in an emergency flight to the hospital in Port Vila.

When he awoke, he could not use his arms or his legs. Four years later, things have improved. He can stand with the help of a frame. A wound on his back, too large for a skin graft, took two years to heal.

Sadly, his eyes have not fared so well. Undiagnosed diabetes had damaged his retina. Without treatment, there was a very real danger of total blindness.

To date, Karlpat has had two laser treatments. These have preserved his sight for the time being, but more treatment is almost inevitable.

When he awoke, he could not use his arms or his legs.

To receive treatment, Karlpat must live in Port Vila, hundreds of miles from Ambrym. It has been four years since he left his teenage son, who lives on the island with relatives.

In Port Villa, his home is a simple room with basic furnishings. There is an outside stove, where all the cooking is done. A bare light bulb is the sole illumination. Exposed wires protrude from the walls.

These are reduced circumstances for a man who had a good job, a happy family, a carefree life. Karlpat tries to be positive. He has the use of his arms, but as he says, “I can’t really walk. I can only stand up with help.

“I can’t really walk. I can only stand up with help.”

Even so, he is doing what he can. “I didn’t know about diabetes or how you get it. Since I learnt about it, I have changed my diet. I do exercises. But healthy food is expensive in Vanuatu. It is difficult.” Karlpat shares his wish of returning to his island, even just to be there to celebrate Christmas with his son.

The larger question is, will he ever be able to return permanently? “Maybe,” is all he can say.

Supporter of The Foundation and well-known NZ chef Michael Meredith joined our Pacific outreach team in Port Vila, Vanuatu, to help raise awareness of the diabetes epidemic in the Pacific.

“Over time, the wrong diet can cause diabetes leading to diabetes eye disease, which can result in permanent eye damage and blindness,” explains Michael.

While in Vanuatu, Michael shared his tips with the public on using the local produce to create a healthy and affordable diet.

What were some of the surprising things you learnt while you were in Vanuatu?

I was surprised and saddened at how high the rate of diabetes is in Vanuatu, especially for an island that has a population of less than 290,000 people. One of the saddest things I saw was some of the young children who have diabetes and how it impacts the whole family. Some people just accept it as part of their life, as it’s difficult to receive medical help. Yet diabetes is something that can be prevented or managed through education, medication and awareness.

Can you tell us about the impact of diabetes eye disease?

One of the patients I met, Karlpat, seemed like he once was a very physically strong man, but his demeanour showed that the last few years have taken a toll on him. I felt very sad for him, he was once the provider for the family, but now in a wheelchair he’s become reliant on his family to support him. It made me think how fortunate we are in the Western world to have available medical treatment that would prevent something like this happening.

What did you learn about people’s diet in Vanuatu?

I was shocked to learn that the diet consisted of mainly white rice and tinned meat. This seemed to be because it’s cheap and convenient, which suits the recent change of lifestyles for the local people, and affordability to survive. But eating that much white rice and tinned meat consistently is really adding to the diabetes epidemic. It’s not about cutting food like that completely out, but moderating your intake of it.

You held a healthy-food cooking demonstration for the public at the Port Vila local market, how was that?

Port Vila has one of the best fresh produce markets I have seen in the Pacific. The market has a diversity of local green leafy vegetables, fruits and herbs. This provided me with a big range of ingredients to cook with. Working with the local ‘mamas’ who run the market was engaging and very insightful. Overall I found it very exciting, inspiring and rewarding.

What did you learn about The Foundation’s work in the Pacific?

I was blown away by what they have established on the ground, especially training the local nurses, which is so valuable to raising awareness of diabetes and diabetes eye disease within the local communities. During the outreach, I witnessed so many people attending the free eye screening, which can detect early signs of diabetes. I also saw a Foundation-trained nurse, Basil, feeling very grateful and happy that The Foundation are building a dedicated eye clinic in Port Vila that can provide year-round care for his people.

I am just so grateful to experience and see first-hand the work of The Fred Hollows Foundation NZ in the Pacific. The trip gave me a huge appreciation of how fortunate we are to have our eye sight and the available healthcare in NZ. It really drove home the significance of the work of how one man’s vision can truly change people’s lives. God sent Fred Hollows.

Rice and beans with lime dressing

Created by NZ chef, Michael Meredith, at a local food market in Vanuatu.