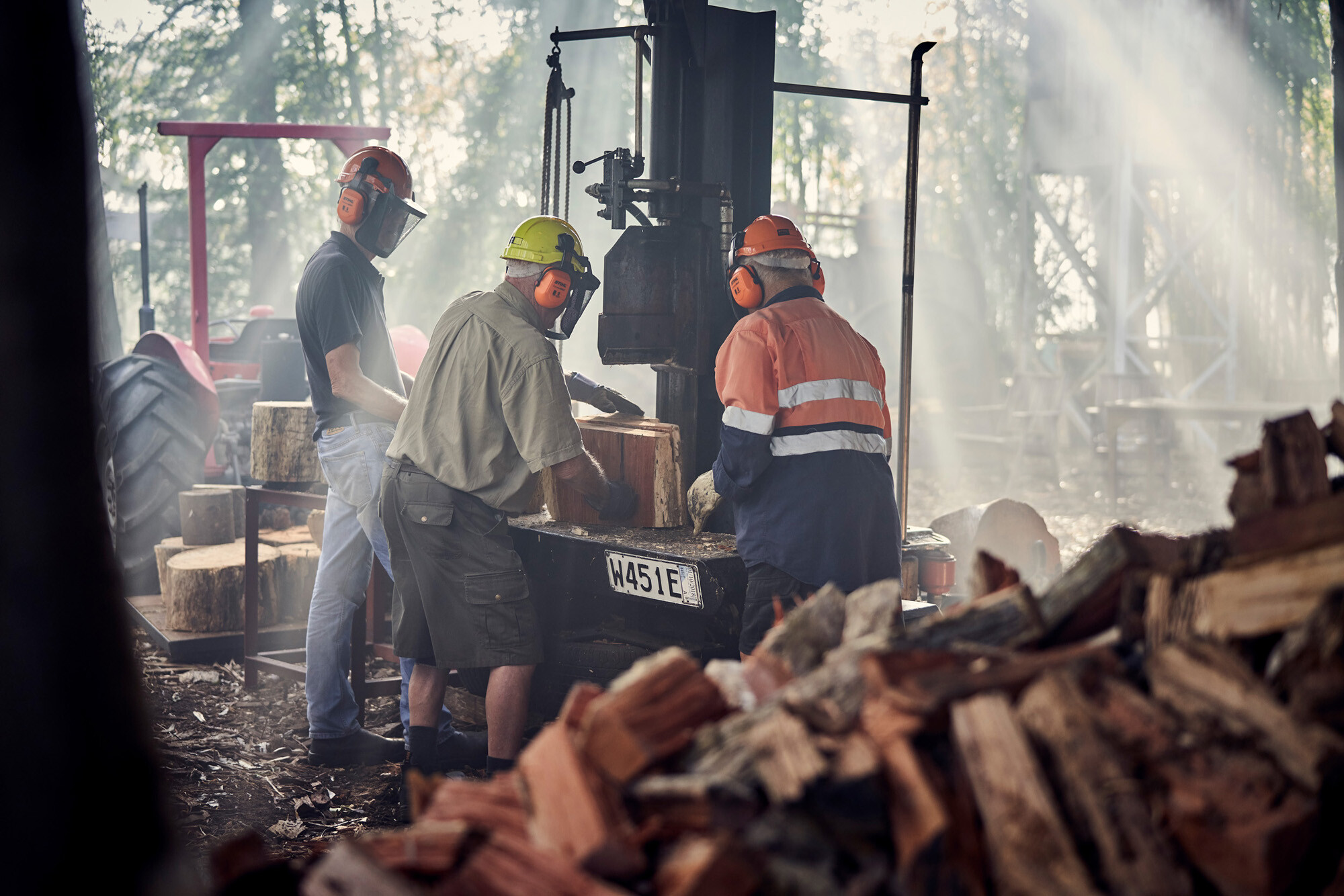 Restoring sight with an axe

In Tonga, an old man sits alone with his thoughts. He is blind and totally deaf. Two thousand kilometres away in New Zealand, another man is working to save his sight. With a wood splitter.

The stories from The Foundation's supporters and what they're doing to raise money is extraordinary motivation for our teams working tirelessly in clinics, classrooms and outreaches. These supporters don’t just fund us, they inspire us.

One of these stories we would like to share with you. How a group of woodchoppers in Kerikeri have given hundreds of hours of their free time to raise money to help the needlessly blind living in the Pacific. In our view these selfless people are the living embodiment of Fred Hollows. They are the ‘Freds of today’, determined to do the right thing. As are all of our supporters who give so generously to support our work. We’re immensely proud that Fred’s spirit lives on.

This spirit was able to save the sight of an elderly man called Apikotoa in Tonga. Api, almost completely blind and deaf, was a lost and lonely man. But when our outreach restored his sight his world changed. He was given something he longed for, his greatest wish – the chance to see his family again.

Read Apikotoa’s story below and how the Kerikeri Woodchoppers helped him see again.

A simple, sparsely furnished room. A middle-aged woman is weaving a “ta’ovala”, or ceremonial belt, while her sister watches her, their talk filling the room. Further away, silent and isolated, sits an elderly man, responding to nothing that is happening around him.

Apikotoa is 76, head of the family. Known as Api, he has 10 children and 45 grandchildren. He cannot see them, he cannot hear them. Api is blind in both eyes and deaf.

This man is far different from the Api of ten years ago. A professional fisherman, he was living on the small outter island where he was born. He was fit, he loved the water, he loved the bush and he loved to compose and play music. His days were full, surrounded by his wife and the members of his family who had remained on the island. He took great joy in being with them, especially the young ones, with whom he played cards.

When his eyes failed, he was forced to move to the main island, Tongatapu, due to limited healthcare available on the smaller island he lived on.

A very different figure now sits on the floor of this simple room. With his sight and hearing gone, so is his mana. You can still sense the power of Api’s personality in his voice, but you can also sense loss and isolation.

Api has cataracts in both eyes. He is waiting for the arrival of The Fred Hollows Foundation NZ outreach to Tongatapu, when he hopes the cataracts will be removed.

However, it is a long time to wait in ever-increasing darkness.

“I feel unhappy, I can’t see clearly or hear, I feel out of place. I wish I could get my sight back, so I could fish, go to the bush, garden. See my wife Malia again.”

This is a soul-destroying isolation all of us fear. However, this isolation can be ended by a simple donation. You can help people like Api.

Ironically, Api’s blindness is comparatively easy to treat. A qualified eye doctor can perform the operation in less than half an hour. Unfortunately, Tonga does not have a permanent eye doctor yet, with outreaches to Tongatapu only once or twice a year. All Api can do is bide his time.

Finally, Api’s wait is over. His daughter has brought him to the outreach. He is unsteady on his feet, needing a long stick to keep his balance. He is jumpy, he doesn’t really know how well things will go. He need not have worried. Thanks to the skill of the Fred Hollows team, his operation went better than he ever expected.

“During the operation I was so relaxed I fell asleep, the doctor had to push my chin up.”

His eye bandaged, Api would have to wait a day before he knew if the operation had been a success. Once again, there would be a nervous 24-hour wait before Api and the doctors knew if both operations had been successful.

This was quite an ordeal for Api. But three days later he was able to exclaim, “I can’t believe I can see again! Now I can walk to church and write my songs down and play cards with my grandchildren. I praise the Lord, and I thank the wonderful doctors and nurses.”

Had Api known of them, there is another team he might have thanked. A group of volunteers living 2,000 kms away in Kerikeri, Northland…

A clearing in a large stand of trees. Mike Collins is walking towards a group of men working around a log splitter.

Mostly retired, the men are working for a cause. The Fred Hollows Foundation NZ.

Every Thursday they meet to split wood that has been donated by people in the Kerikeri community. Once the wood is split and dried, they sell it back to the community, the proceeds going to The Fred Hollows Foundation NZ. Mike and his mates deliver the wood on the back of their ute, and they will even stack the wood if the buyer wants them to do that.

Mike has been part of this group for more than ten years. Together, they’ve been able to raise more than $140,000, saving the sight of over 5,600 people.

This story reminds us so much of Fred Hollows own can-do attitude. This sacrifice of time and effort has enabled The Foundation to restore sight to thousands of people in the Pacific, people like Api.

“We started with just the wood splitter, in the paddock where the wood was. When the opportunity to grab this shed came along we took it. It’s given us shelter on a wet day and somewhere to store the wood while it dries.”

The cheques we receive from these quiet heroes convince us Fred’s spirit is still alive. Fred once said, “When I’ve seen an opportunity, I haven’t sat down and called a committee meeting. We’ve gone and done it.” He could almost have been talking about Mike and his friends. They are very special people; as we say, “the Fred’s of today”.

“The people who are buying the wood are basically donating to Fred Hollows. We just cut and deliver the wood.”

However not everyone can split wood or follow in the footsteps of people like Mike. We all do what we can, and every single donation we receive is greatly valued. Your donations, large or small, are the Kiwi way – don’t hold back, get stuck in, make a difference. When you look at the difference we were able to make to Api, it’s testimony to the amazing work Fred was doing 25 years ago. But it’s also testimony to the power of your donations. Without them there would be no happy outcomes for people like Api living needlessly blind.

"We like the idea that, like Ed Hillary, Fred didn't wait for the committee but just got on with it; we all know what it is like to be blind just by shutting our eyes (and not gender, race or religion related); and 'Fred' gets 'a lot of bang for the buck'."

You don’t have to chop wood, donating makes you a hero too!

Both of these men are very special. One endured the deprivations of blindness. The other did not turn away, nor did he hold back.

Sadly, Api passed away within a year of his operation. However, restoring his sight granted his greatest wish. He was able to see his family come together to celebrate, something he had longed for when he lived in darkness, blinded by cataracts.

He also met Doctor Duke, who will be arriving in 2019 as Tonga’s first permanent eye doctor. It gladdened his heart that others would not have a similar wait to be treated.

These guys chop wood. What could you do? Visit our community fundraising page.