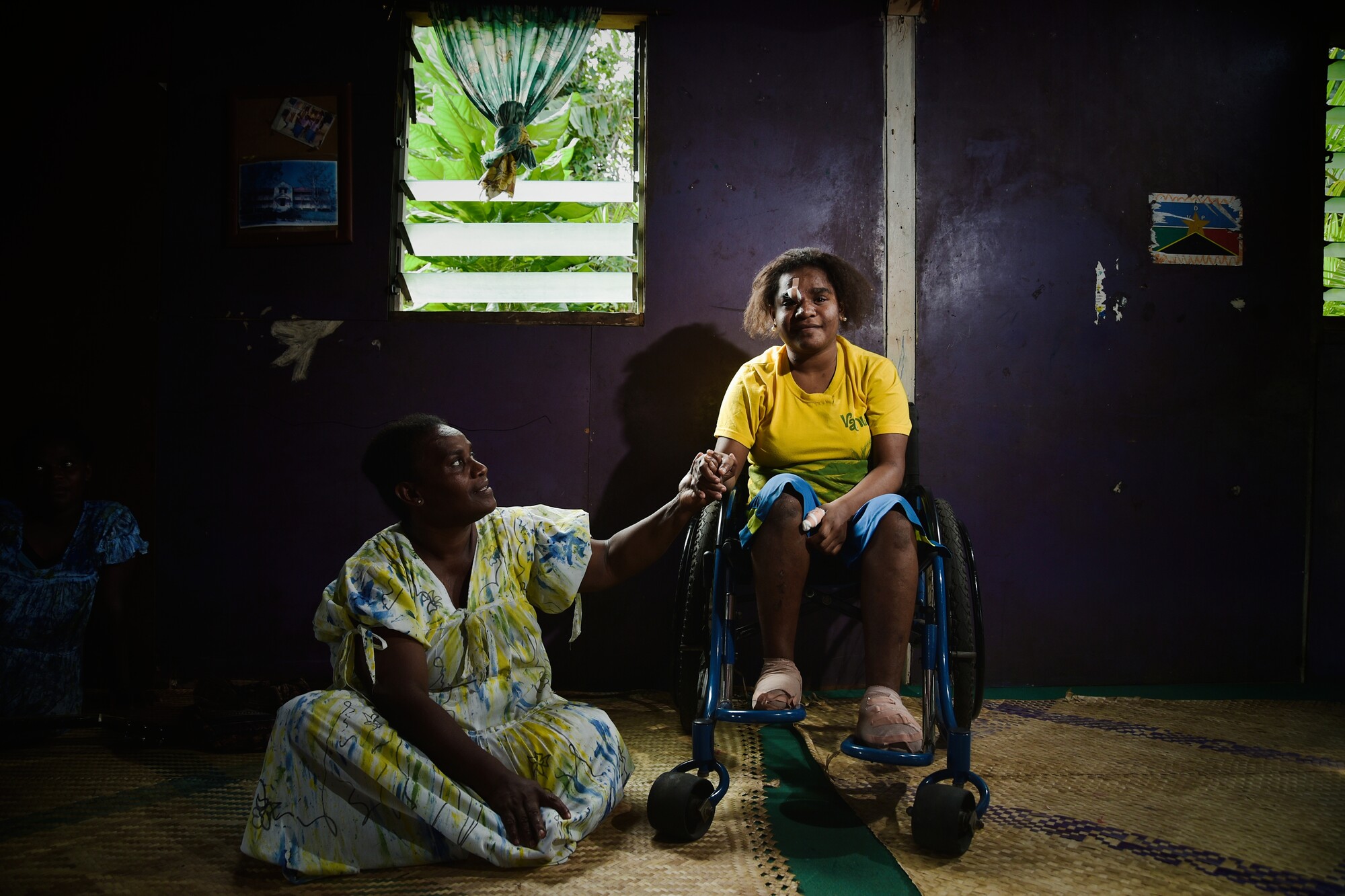 Diabetes eye disease is a complication of diabetes and is the world’s leading cause of avoidable blindness in the working age population.

Diabetes has become a rapidly escalating problem in low-income countries. It is at one of the highest rates in the world in the Pacific, despite being uncommon only a generation ago.

Throughout the Pacific, diabetes and its devastating outcomes, such as blindness, are often caused by a lack of healthy food choices, which can be out of reach for people living in poverty, and a lack of awareness about what causes the disease.

The disease is having devastating repercussions on the population in the Pacific - it has been described as an epidemic. The below video shows the personal impact diabetes is having on just one person, 22-year-old Clerence.

During our recent outreach to Vanuatu, our visiting team saw many diabetes eye disease cases. Clerence’s was one of the saddest.

When the team met Clerence at her home, she was sitting alone in the dark, in a wheelchair that once belonged to her father. She was not able to join a village celebration taking place next door to her home. But she was still smiling and welcoming, glad to see us.

Clerence has suffered from diabetes since she was a baby. As is often the case in Vanuatu, her condition was not diagnosed until many years after she was born. While she now takes insulin, she has been continuously affected by infections for which she has not always been able to afford to take antibiotics. Amongst the consequences have been two amputations, to remove her toes on both feet.

She also has dense cataracts, leaving her with seriously impaired vision. This is another symptom of her diabetes. The first symptoms were noticed when she was ten years old and her condition was diagnosed, but her mother did not understand the link between diabetes and worsening vision.

"The hospital did an eye screening at her school. They said her sugar level was high... we had never heard of this before."

At this point, many things might have helped Clerence. For example, if she had been able to follow a healthier diet. Unfortunately, many of the foods that will help diabetics are very expensive in Vanuatu. Especially for a family without a breadwinner. (Clerence’s father died last year from diabetes, at 48 years old.)

"It's very expensive what they tell us to eat. Greens, brown bread, brown sugar, brown rice. Not too much white rice or bread."

Under-treated, her diabetes has led to a series of complications which has led to infections. When she has come to our outreaches, we have been unable to operate because of these infections. For example, at our last outreach a year ago, an infected boil on her face meant we had to postpone her treatment once again.

Diabetes is now so common across the Pacific that many patients and their families accept it as normal. Similarly, the conditions associated with this disease, such as diabetes eye disease.

We're working to make a difference

At the beginning of 2019, the people of Vanuatu no longer had to rely on our outreach visits to get eye care services. A Foundation-trained ni-Vanuatu eye doctor, Dr Kasso is now in place permanently.

The return of Dr Kasso to Vanuatu coincided with a much needed upgrade of the Port Vila National Eye Centre. This upgrade will enable us to take a more integrated approach to diabetic eye care.

All this has been made possible with your donations, and the impact will be life-changing for many.

That said, we know we must do more, and for that we will need your ongoing support.

Left: An ecstatic Dr Kasso stands on the building site of the upgrade and extension of the Port Vila National Eye Centre.

In February 2019, Clerence was the first patient at the new Vanuatu National Eye Centre and the country’s first permanent eye doctor, Dr Kasso, operated on her. Clerence can now see properly for the first time in years. As Dr Kasso checked Clerence’s vision she shouted, “I kiln I pitim kiln!” [More than clear!].

If the diabetes that led to her eye disease had been recognised and managed properly most of her problems, including her cataracts, might have been avoided.

Clerence is just one of many who is affected by the epidemic of diabetes hitting the Pacific, as people are having to move away from the healthy foods that were the mainstays of their traditional diet. We believe the scale of diabetes within the Pacific requires a co-ordinated approach, involving governments, other key organisations and The Foundation.

This is a large-scale undertaking that requires full-on commitment from our Pacific eye teams. It also requires the support of people like you, whose donations will make it possible to overcome this challenge.

With your help we can provide the solution. Without it we can’t, and people like Clerence will continue to suffer.

When her symptoms were first noticed, her mother did not understand the problem.

“I just asked the teacher to move her closer to the blackboard.”

It was not until she was 16, when she suffered a major fall requiring surgery on her leg, that the full extent of her condition was recognised.

Diabetes caused her leg to become infected, requiring a long stay in hospital. Her eyesight had also worsened. But at least she was now taking insulin.

As she says, “It’s cloudy. I can tell someone is coming towards me. I can see an image, but I can’t tell who the person is.”

We believe it is a tragedy that we were not able to operate on Clerence’s cataracts until 2019 when she was 22.

On the two occasions she came to an outreach, existing infections have prevented us from operating. But once these were resolved, our new permanent local eye doctor, Dr Kasso, was able to operate.

Before her operation, she stayed at home, unable to work or live the life of a normal 22-year-old. Her mother didn't work either, having to care for her and her younger sister. Their lives depended on the generosity of their relatives and friends and the meagre amount they earned selling fans at the local market.

This is the darkness of poverty and lack of understanding. Together, we can do something about it.